This room, first excavated by J. Neils, was cleaned down to a heavy rock stratum, probably bedrock.  Only scattered pottery was in evidence.  Occasional sherds, particularly the ones from near the surface and from the sides of the wall foundations, may join with the pottery excavated by J.N.

Pottery was scarce under the wall.  It consisted mainly of bucchero and occasional pieces of coarseware.

In grids J-L/26-27, the area was excavated down to the light yellow soil stratum.  The follow strata were in evidence (from top to bottom): dark brown, yellow, light yellow.

The pottery in the top stratum was mostly nondescript.  Finer ware was found in the yellow stratum.  Particularly interesting are the fine bucchero handle ( p. 27, Find #1 ), the stamped sherd ( p. 21, Find #1 ) and the rocchetto with a stamp ( p. 29, Find #3 ).  Occasional sherds of Italo-Corinthian ware were also in evidence.

The great majority of finds came from the light yellow stratum.  Here a heavy tilefall (J-K/26) was discovered and three pan tiles (width and length measured).  Underneath the pan tiles in J-K/26 were an almost complete coarseware pot ( p. 155, Find #1 ), a section of painted ridgepole tile ( p. 151, Find #1 ), and a terracotta applique ( p. 153, Find #2 ).  Some of the finer pieces of Italo-Corinthian ware also came from this stratum.

Further down in the yellow stratum was a heavy concentration of "redware" of the type excavated by J. Neils in room J-P/28-30. As noted on p. 87 , this "redware" was scattered in such a manner as to indicate that it was dumped on purpose in this area.  There is no doubt that the redware stratum is not the result of a natural destruction.  Also worthy of note is the fact that the pottery continues under the western foundation wall ( see photographs on p. 86 ), proof that the pottery antedates room

J-P/28-30 and that the foundations of the room were sunk into what previously had been a pottery dump.  (It would therefore not be surpising if a kiln were found at a later date in the vicinity of room J-P/28-30).

In cut 3, several pieces of frieze plaque, mostly banquet frieze, as well as some Italo-Corinthian sherds, were unearthed.  The other pottery was unexceptional except for some fine bucchero (p. 75, Find #43; p. 77, Find #4)

Excavation in this area was undertaken with the purpose of defining the relationship between the two northern rooms and the foundation walls up the upper building.  The stratigraphy of this trench is quite clear - there are three main strata: brown, yellow, and dark brown (from top to bottom).

The dark brown I stratum mentioned on page [information not given] is only to be seen in the western profile of cut 5 ( p. 164 ) and seems to be only a local phenomenon (grid B-C/34).

In grids C-D/34-35, a heavy stone concentration, packing or terracing for the upper building, was encountered.  This stone packing slopes down to the north where it passes under (in grids E-G/34-35) a heavy tile fall.  It was in this tile fall that the gorgon antefix fragment ( p. 111, Find #1 ) and a large fragment of sima ( p. 139, Find #3 ) were found.  Characteristic of this area is the sharp slope of the strata, showing that the north part of the hill had a similar slope at

the time of the Etruscan habitation.

The yellow stratum in the northern section of cut 5 was fairly sterile.  Pottery and finds were made abundant in the dark brown II stratum.  This pottery was mostly handmade and wobbly - virtually all coarseware.

Particularly noteworthy among the finds in this early stratum are:

The relationship between the two northern rooms and the upper building foundations is evident in the profile on p. 166 .  It seems that the foundations of both buildings were sunk into the same stratum (light brown).  The difference in the altitude of the foundation courses is probably due to the fact that the hill sloped in antiquity. 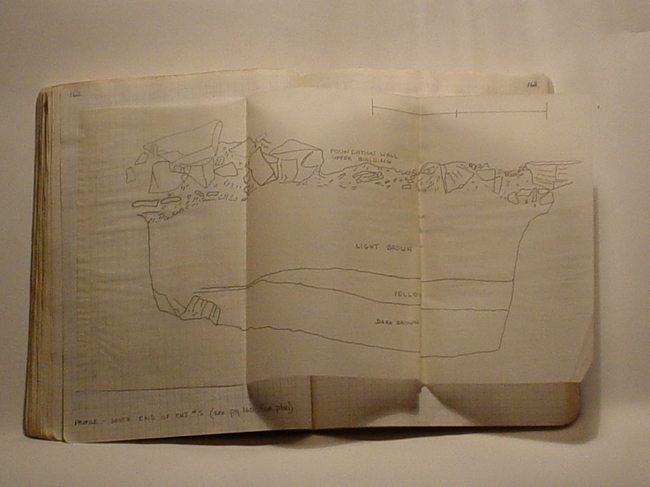