Work continued on the circular area of black earth ( see page 183 and sketch page 184 ).  The layer of broken pottery fragments described on the pprevious day proved to be a deposit circa 15cm thick and it produced mny large fragments of vases, some of very fine material, in addition to a cylindrical terracotta "vase" pierced with circular holes.  This deposit produced pottery which was sent in 6 boxes to the magazino.  These 6 boxes and one other from the less deep layers of this circular area were sent to the magazino and christened "T6E (2) Stratum G."  Below the level of this deposit was a layer of yellow clay mixed with white powdery earth (some chunks of tufa were also found) which overlay a layer of rock.  Digging was discontinued at this rock layer circa 60 cm below the excavated surface of T6E (2).  I will comment once again that in the entire deposit in the circular area no tiles or fragments of architectural material wer found below the level of the rectangular series of stones which is shown on page 152 .

Work progressed fast, and it became clear that there were foundations made by fairly large stones all through the trench to the E, though no clear pattern was visible.  The stones were partly off line with the S wall, of which they m9ight be a continuation.  A conglomeration oof stones appeared to the N in the trench and it might be a crosswall.  A rough estimate was made, and it seems that it might be in line with the E wall of the long building in Tesoro 1.  However, further excavating was to be done to establish if the stones in the extension of T6F

are to be regarded as a wall, or if they have been moved there as a debris from a destroyed edifice.  It should be noted as a disturbing fact that 2 waterspout heads were found ensconced between, and partly under, tow lare stones in grid J16.  The number of tiles fragments was considereable in relation to the very thin layer that formed the topsoil and 1st layer.  5 boxes were dumped.  1 piece of horse race frieze was also found .  The stones were cleaned, and it seemed that the S wall from T6D and T6F continues from at least 1m in the extension, that in grid J-K, 12-13. 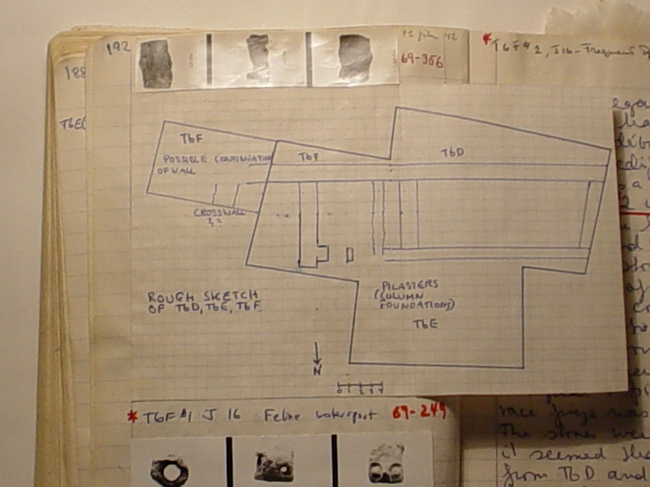 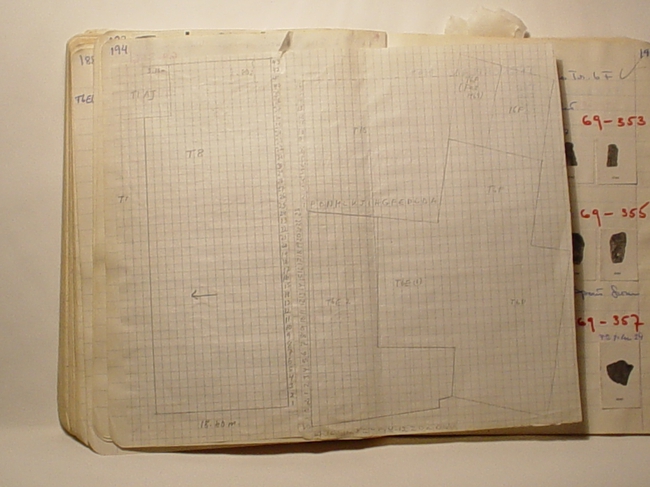