Work was started with three workmen in order to define the pilaster A ( see plan ) and other possible pilasters to the N.  A cut was therefore made in the trench adjoining T10 which is T8.  This part of T8 was partially

excavated in 1969 when topsoil was taken off.  Now the difference in depth between T10 and T8 is to be leveled.  The ground rises sharply from the E edge of T8 toward the N where bedrock is sticking up.

The grid used is the one from

Two pieces of banquet frieze were found: one with the lebes-stand well preserved in clear outlines in grid P28; one worn piece in R26

Some very large animal bones were found and about a 1/2 box of pottery-mostly coarseware but also some fragments which probably belong to cooking stands.

One spindle whorl P28.  It should be noted that one sizeable tile fragment and

NOTE ON "BEDROCK":  The label bedrock for the stone formation in the cut T8 N-S 26-28 implies rock set in a pattern seemlingly like bedrock, that is a "carpet" of rock with a rugged, broken up surface.  however the "spur" in OP 28 consists of one layer of stones, at the same level as the column base, with dirt underneath.  The section N 27-28 has not been fully cleared, but there is a strong possibility that it consists of fallen (?) rocks

one pot handle were found under one of the large stones which form the central stone formation.  Further clearing is therefore necessary before it can be established if the stones form the lowest level or are placed on top of terracotta fragments. 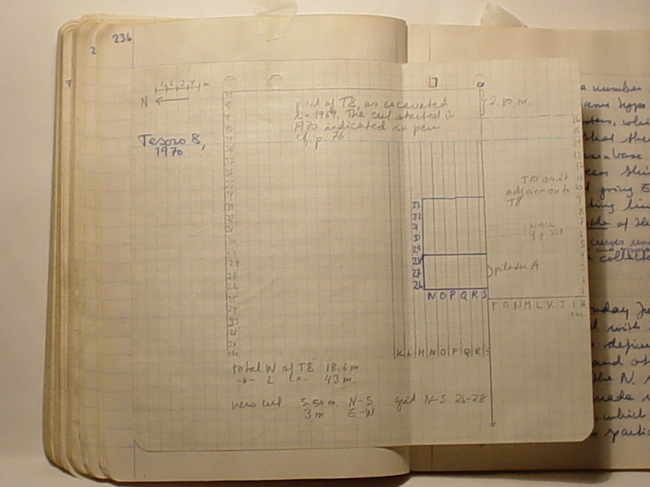