The area excavated, in particular the tile fall, contained the following:

At the east end of the trench, the tile layer began to

slope downward (cir. 75 cm below topsoil) and move to the north.  In grids G-I/45-46, a second layer of smaller tiles, possibly a continuation of the first, was excavated.  However, in the rest of the trench, digging stopped below the upper tile fall.  At the 47th meter where the tile fall stopped, a possible stone foundation running N-S was uncovered ( see photos on p. 62 ).

Another line of stones, prallel to the first and approx. 2 meters to the east, appeared in grids H-I/49.  The southern portion of this possible foundation remains covered by a stone heap, so it is not possible to determine its extent.  The stone pile which covered the foundations in grids G-I/53 was removed; this wall extends to the W wall.

The strata in T-19 include: humus (topsoil); a dark brown soil layer with small chipped stones; a yellowish tan soil layer; and a reddish brown tile layer.  At the level of the reddish brown stratum, part of a N-S wall foundation of heavy stones and a few tile fragments was uncovered in the 31st meter.  A possible cross wall running E-W, consisting of small stones and many tile fragmnets, was left at the south end of this trench: its full width remains unexcavated.

The tile layer (heavy concentration of small, tightly-packed terracotta fragments and carbon) and the large sections of pithoi directly above were lifted.  The trench was left at the level of a hard, yellow pavement (?) - very uneven.

The strata in T-18 include: humus (topsoil); a brown soil stratum; yellow soil stratum; and a red stratum with heavy carbon.  At the level of the red stratum, a N-S wall foundation of heavy stones was found in the 28th meter.  The possible wal lfoundation running E-W, found at the south end of T-19, extends across the south end of T-18, J/28-30.  Scattered tile fragments were found in the yellow and red strata.

The reddish soil layer also produced large quantities of sherds - predominantly burned red.  This pottery is to be cleaned and restored in 1973. For finds see JN II.

Note:  Under this reddish soil layer is a heavy carbon layer and possibly a wooden beam in J-L/30 which has been left covered until 1973. 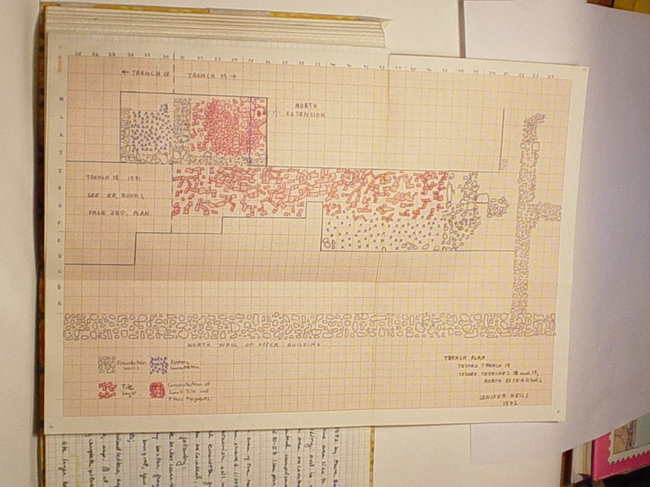