Diagram of Tesoro 6F and 10

Work started in T10.  This trench was excavated in the Sept. - Oct. season of 1969 and a general outline of hte walls found is shown on p. 218 and on p. 228 .  The area between column bases (pilastars) B and C, marked with an arrow (->), had been left last year since it consisted nainly of large tree stumps.  These stumps now being carefully removed in order to see if there is another pilaster in line with the others, or if there is an opening.  Attempts will be made to draw a sketch plan of the walls and pilasters in T6F and T10 as they appeared on the first day of

the season, without further clearing.  The outline of the walls is basically clear.  The difficult parts are the "lines" of stones which run through T6F and to some extend T10.  Their possible relation to the pilasters is to be studied.  Unfortunately the level of the walls and the lines is such that bedrock interferes with it.

Work with the tree stumps continued all day.  By the end of the afternoon it seemd clear that there is a continuous line of stones extending north from column base C.  Since there is a line of befrock going east-west in the area of the tree stump the workmen were told to clean the whole area around

the tree stump very carefully in order to establish possible re-mains of one or two column bases.  The tree stump itself is a triple one, probably from an oak tree and is too tough to cut away without upsetting the area around it.

The distnces between the column bases (center to center) is roughly 3m + -.  Thus it would be possible to assume two bases between those labeled B and C.

In measuring the walls one could see that in some places (indicated with an X on the sketch plan) there is an outer foundation line set at lower level, like a step.  this system is well known from the northern long wall in Tesoro 1, but has

not been seen before in T6F or T10, partly because the foundations seem to be preserved only in their very lowest course. 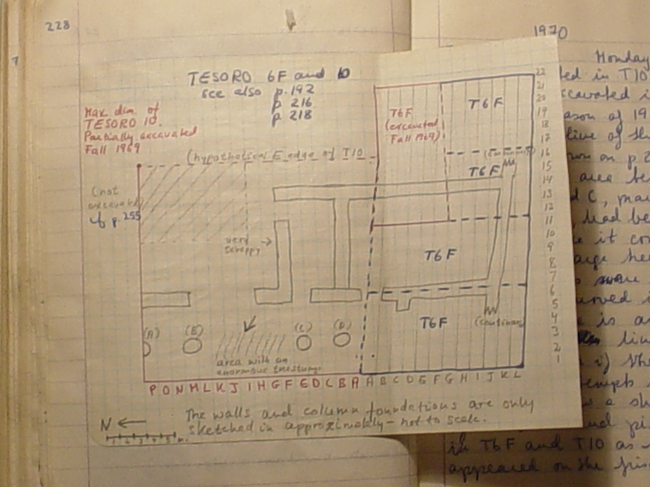